The sitcom Friends does not need an introduction. Whether you are a social media savvy person or a boomer, one thing you can definitely agree on is the popularity that friends have amassed. In this article, we present you with the ultimate Friends season one quiz, but before we proceed with it, let us look into the details of the show.

Friends is a sitcom that revolves around the lives of 6 friends and their daily shenanigans. The first season of friends debuted in 1994 with 24 episodes. The pilot of the show was released on September 22, 1994. Since then, there has been no looking back for the cast of the show.

The show was created by David Crane and Marta Kauffman and wanted to reflect the lives of their friends and the youth of New York. This started the journey in Season 1 in “the one where Monica gets a roommate”.

Season 1 built a sturdy foundation for the show to be built upon. They made many distinctions between each character and made them stand out in their own rights. Whether it be the sarcasm of Chandler, the sassiness of Phoebe or the charm of Joey, each character has its own arc. 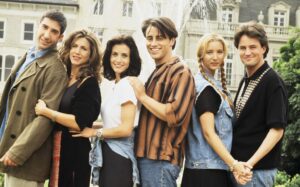 We are introduced to Marcel, the monkey in the first season itself. The story of Ross and Rachel also begins to unravel from the first season, which goes on to become one of the lead romance arcs in the sitcom. What follows these is a new misadventure in every episode!

We hope your memory has been refreshed. So if you are a huge fan of the show, this quiz shall test you at the roots – Season 1 itself! The Ultimate Friends Season one quiz is here to test your knowledge.