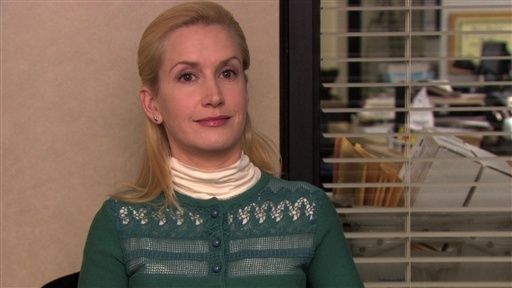 Hello guys, welcome back to another trivia of the office. In this article, we will test you on the hardest Angela Martin quiz. Before we begin with the quiz, let us look into some details about the character and the show itself.

Angela Martin is the role played by Angela Kinsey. It was later revealed in the show that she even had a middle name “Noelle” in the episode Happy Hour. Being the head of the Accounting Department at Dunder Mifflin Scranton, she is often seen as being stern and stubborn, and also being strict to other co-workers.

Along with being the head, she was also the former head of The Park Planning Committee. Though being strict at work, she does use her powers to exclude the complaints that are filed against Dwight Schrute because of their then-secret relationship. It was then that she became one of the lead female characters of the show till their breakup in the episode “Fun Run”.

Speaking of being stubborn, Angela had a sister with whom she had not spoken for the past 16 years, over something that even she couldn’t remember. In the show, it is clearly shown that she had a problem of not apologizing, evident from the episode “Product Recall” when she says ‘our official position is apologetic’ instead of saying sorry. Another incident that proves this fact was when she used a three-person monologue to apologize to Oscar for being homophobic. The only exception to this was when she said sorry to Kevin on account of her being ‘mean’ twice in the mini-web series “The Accountants”. 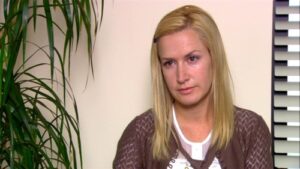 Angela was a homophobic person which made her dislike the show “Will and Grace”. She can be seen listing colors that seemed whorish for her, which included green and orange. In the show, she states that she would bring The Bible and the Purpose Driven Life if she were stranded on an island which suggested the fact that she was a conservative Christian. As stated by her, she hated being titillated which was the reason why she would burn the mystery novel genre “The Da Vinci Code”.

“A hypocrite”, well partially yes, as in the show we see Angela frequently making fun of Pam for dating two guys, Roy and Jim, in the office. Although she dated Andy, Dwight, and the Senator and cheated on all three of them with each other. Her friends, especially guys, made fun of her regarding her height and weight. Michael had a nickname for her ‘Booster Seat’, which was about small children having to sit on one in restaurants.

Phylis was Angela’s main target during the launch party but had a huge blow when Phylis quit the Party Planning Committee. One of those awkward and embarrassing moments that Angela had gone through in the show most definitely was when Meredith opened Angela’s envelope which contained incriminating information on several of the pastor’s peers and asked who Pastor Davis was, without knowing that Angela had a clandestine sexual relationship with the church pastor.

Now since you are done reading about Angela, a quiz would let you test your knowledge that you know about the character. Try the hardest Angela Martin quiz and let us know your score.

The Hardest Angela Martin Quiz Ever