Welcome guys to another edition of ‘The Office’ quiz. In this one, we will test your knowledge of Oscar Martinez, an accountant at the Scranton branch of Dunder Mifflin. But before we begin the ultimate Oscar Martinez quiz, let us look into some details of the show.

Oscar Martinez is one of the sensible characters of the show. His parents were from Mexico but moved to the United States where Oscar was born. He was one of the few openly gay characters on television during the time the show was aired. Oscar is known for being an intellectual person in the office, who often asks financial questions that his colleagues will not.

He is also considered to be the smartest in the office and also as a ‘know it all’ by his co-workers. His ability to describe a financial situation with such ease is evident when he explains the budget and the surplus to Michael from different points of view, be it a 5-year-old or an 8-year-old. He is such a genius that he can see the reality and logic in financial situations such as when Michael started up his own paper company or Ryan Howard’s online startup business.

Speaking of his relationship, Oscar has two affairs, one with Gill and another with Robert. The main highlight was when he and Gill get caught while on a date. He calls in sick at the office but Dwight goes to spy on him and was actually on a date with his boyfriend Gil. Dwight, not realizing that Oscar is secretly gay, tells Oscar that he won’t tell Michael if he can hang out with them. 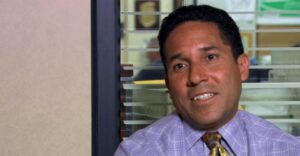 Dwight later watches TV with them while Oscar and Gil hold hands behind his back. His second affair was quite controversial as he had an affair with his colleague Angela’s husband, Robert. This was not welcomed well by the former. She even arranged for a person to break Oscar’s kneecaps after she came to know about them.

That’s all with the information about him. Down below is the ultimate Oscar Martinez quiz, take this quiz to prove your knowledge about the Office and the characters in particular.