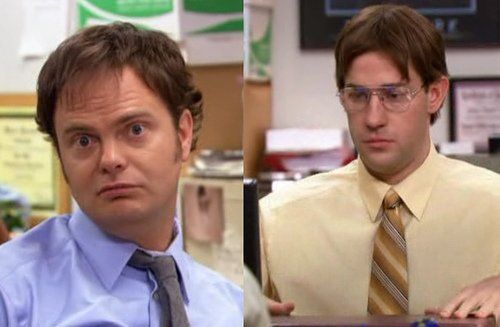 If you have watched The Office, you know how close to a show one can get. The show is filled with fun and colorful characters that fill their office with a very exciting aura. Two of such characters that are loved, all throughout the show and are also frenemies are Jim and Dwight! Both of them were salesmen at the office and there was something about them that really did make us laugh all throughout the show. From day one, we could see how different these two were from each other. Literally the OPPOSITE.

The best part about their relationship was how they amused us, the audience, by pranking one another all the freaking time. The pranks used to go upto an extent that one of them had to reach their limits for it to stop. Ah, these two. To one’s surprise, Dwight and Jim’s relationship was also quite intense. You can’t disagree when we say this that we have all lost count of the number of times Dwight demanded that Jim should get fired. Although they are tagged as frenemies, Jim and Dwight did form a bond that cannot be expressed in words. 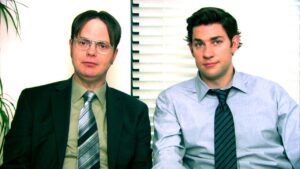 Remember when Jim put Dwight’s stapler in Jell-O or when he paid everyone $5 to call Dwight as Dwayne? Or oh the most hilarious prank was when he moved Dwight’s table and chair in the bathroom. Remember when in season 3 Jim dressed and acted like Dwight in the most fun way possible? Dwight then made a comeback towards the end of the episode by dressing up as Jim and then well, we all laughed for hours. By this time, we were all sure that Jim and Dwight were forever going to have this kind of relationship.

However, the creators had something else planned for us and we saw how Jim and Dwight started getting along. We saw this when, well we are not giving you the internal details. We are going to quiz you one of those! (Wink, wink). They then started to spend time with each other and they also became quite good pals. Can you imagine that Jim and Dwight supported each other to get a promotion? Jim also went on to become bestest mensch of Dwight and he also played various pranks on the man. 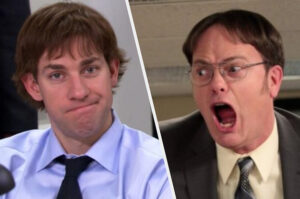 Well, now that you have recalled the story of the series, and we took you down the rocky road of Jim and Dwight’s relationship, it is time that we quiz you on them. Yes, we have created a quiz on Jim and Dwight’s relationship and it is saucy. The quiz is going to have 30 questions, and it is not going to be easy, we promise you. We are sure that you will have a lot of fun attempting this quiz and that we will not let you score well easily. So without making you wait for longer, let’s get started with the Jim Halpert And Dwight Schrute Quiz.