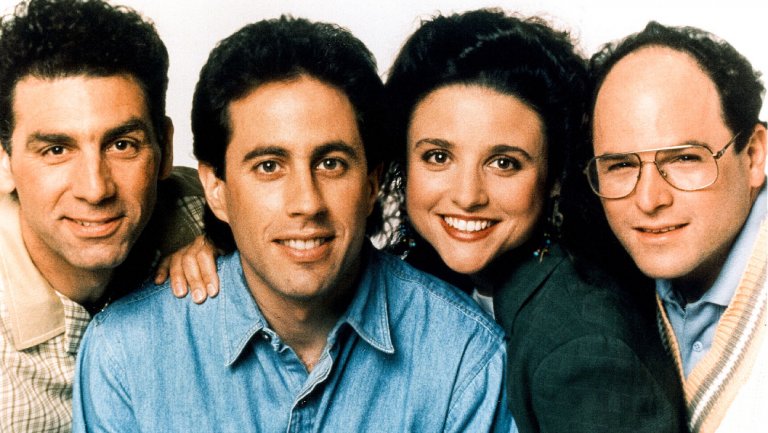 Little did the Peacock Network know that eponymous star Jerry Seinfeld and his co-creator Larry David’s little “show about nothing” would become their benchmark sitcom for the next decades, redefining primetime comedy in the process.

It is definitely one of the most successful sitcoms to ever run on television and will undoubtedly live on to entertain new generations for years to come.

Here we have a fan made script for Seinfeld bonus episode. Read it and let us know if you like it.

*Seinfeld in his apartment. Kramer enters*

Kramer: Well, Bob Sacameno is in the hospital!

Seinfeld: Oh no! Does he have the virus ?

Kramer: No he got mobbed by a bunch of lunatics trying to steal his toilet paper. He was coming back from the supermarket.

(Kramer agitated) What is this world coming to Jerry! You go out for groceries like a regular person and get mobbed on the street!

Seinfeld: Yeah it’s a shame. Is he doing alright?

Kramer: Of yea he’s fine, shocked with a few bruises. I just saw him at the hospital.

Seinfeld flinches back: (Shouts) You’re coming from the hospital ! Should you not be quarantining yourself ?

Kramer: Calm down Jerry. You’re gonna get it anyway! Everyone’s going to get it. Hell you might even have it and don’t even know it!

*Seinfeld grabs a stick and put in between himself and Kramer*

Seinfeld: You need to keep a 2 meter distance from me mister. 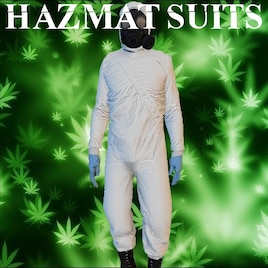 George: It is me ! I’m not going to let some silly virus get to me like that. Ha!

*George Picks up an apple and tries to bite. Then stops realizing the suit helmet is in between. *

George: Well you know the best thing, nobody can tell now that I am bald.

*Seinfeld gets a call. It’s from his parents trying to convince him to come to their place from New York*

George (talking to Kramer now): You know there’s no toilet paper in the market. I went crazy trying to buy some. Everything is empty 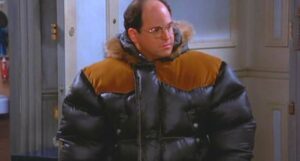 George: It’s a man-eat-man world out there. I had to grab it from a guy on the street.

Kramer stares at George incredulously: It was you!

Elaine enters: You know that Chinese restaurant receptionist I sneezed on?

Seinfeld: Yes what about him

Elaine: He’s sick now and suing me ! And he’s got that Chinese shark lawyer.

Seinfeld: Don’t worry you’re not sick so can’t have infected him.

Seinfeld: You can get Jackie Chiles, he’s good. 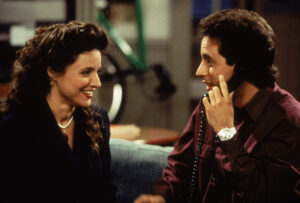 Jackie coughs and sneezes on the other end of the phone

Seinfeld: Oh no Jackie, you got the virus?

Jackie: Yes, I am sick. It is unacceptable, disgusting, preposterous ! *Sneezes*

Checkout if you’re spone-worthy in this Seinfeld quiz