Hey guys! Welcome to another fun trivia about ‘The Office’ where we will ask some difficult and fun-filled questions. And today we are going to talk about one such amazing character—Kevin Malone. Yep! We are talking about the Ashton Kutcher of Dunder Mifflin Paper Company. But before getting on to the ultimate Kevin Malone quiz, let’s take a look at what made the minor characters of the show so different from other sitcoms.

In the history of workplace sitcoms, The Office will always top the list. No matter how old it gets, the show will always be relatable to the people of every generation. It is not because the show has something very different. The show’s concept is very basic and common, and as a matter of fact, it is the show’s basic concept that makes it so unique. Another thing is the character of the show that made the show so lively and relatable.

Kevins’s character is adapted from the original The Office’s Keith Bishop. Kevin is one of the most “normal guys” after Oscar in the company. Though he looks childish at times, yet he is one of the most amazing characters that evolved a lot throughout the series. Though Kevin is considerate towards his fellow workers yet he is seen passing offensive comments towards his colleagues at times. And how can we forget Kevin’s side glance at the camera? There are so many things that Kevin’s character had and it is these little details that made him so memorable. But it is not always this memorable, especially in the first season. 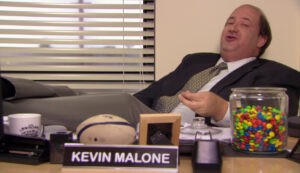 So that was it for today. Now let’s jump up to the ultimate Kevin Malone quiz and let’s see how much can you score. Do tell your scores in the comment section.

Checkout: The Hardest ‘The Office’ Quiz Ever