The office had an incredible team of writing because the show became a huge hit and became one of the best shows ever made. But we can’t give all the credit to the writing. Can we? Simply because the show has some badass actors who took the show to the next level. And today we are going to discuss the only lead actor of the cast who appeared in all the episodes and he is all the most dynamic, weirdest, and the most loved character in the sitcom. Yep, you guessed it right! It is none other than our king of kings Dwight Schrute.

We all know that ‘The Office’ is the official adaptation of the U.K. original series of the same name but all the characters of the American version have a different place in our hearts. And when it comes to the character, who can beat Dwight? So let’s take a look at why this over-enthusiastic salesman, a farmer, and a full-time annoying employee is everyone’s favorite. The most important thing about the character of Dwight is undoubtedly the acting of Rain Wilson. Believe it or not, the actor did a lot of research regarding the character. From the middle parting of his hair to the way he speaks… you name it! And he did succeed in bringing originality to the character. As the actor revealed he did watch all the episodes of the U.K. version and loved it. But still, he incorporated a certain characteristic to the character which proved fruitful.

And how can we forget the writers? A lot of the show’s characters were the actors such as Mindy Kaling, B.J. Novak, and Paul Lieberstein. So it ultimately became a very friendly environment and the character thus formed as a mixture of so many different traits. Dwight is so loved that many fans do find him even more entertaining than Steve Carell’s character Michael Scott. But if we looked into it carefully it seems that the relationship between Dwight and Michael is what is loved by the audiences the most. And unlike other characters, Dwight did have some of the most iconic relationships with the other members of the show. 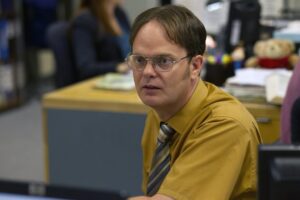 Dwight may be around Michael most of the time, but he is often involved with other characters as well. Since a single person can’t handle his undivided attention, he often divides it into different places! Jim pranks and Dwight’s reaction and counter-pranks, his description of himself and his family and his farms, his protective side for Pam, and his sarcastic comments on others make him a mixture that is weird yet we can’t ignore it. All this and the acting of Rain Wilson, what else is needed to make the most iconic character of the television? So, that was about Dwight and his mishaps. Now take up the ultimate Dwight Schrute Quiz and let us know how much you know him. Don’t forget to tell your scores in the comment box.