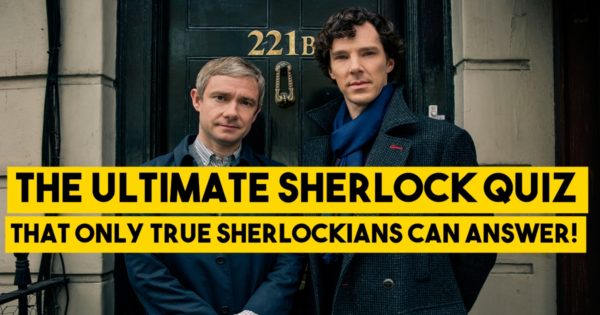 This show’s name is enough to know what it is about. Sherlock is a British TV series which tells us about the ‘consulting detective,’ Sherlock Holmes, and how he solves the mysteries. Of course, Sherlock goes nowhere and is known nowhere without Dr. John Watson, his roommate. The pair is an exclusive one, filling in where the other lacks. And today, we will check your knowledge about them in this Ultimate Sherlock Quiz.

The series Sherlock is highly praised for its story writing, direction, and acting. Benedict Cumberbatch and Martin Freeman have shown us what we imagined these two characters to be like. From the moment they meet on the show, till the end, we see the boys going on as a team and solve mysteries. Of course, Sherlock is filled with pride and he belittles everyone, but do we see that he notices and respects Watson, Mrs. Hudson, and everybody else? Well, let’s say Sherlock isn’t that down to earth.

Another important character in the show is Jim Moriarty. He challenges Sherlock and continues to do so, even after his death, which one would have believed to be a symbol of Sherlock’s victory. Jim even finds out more about Sherlock than Sherlock did himself. He finds out his weaknesses, knows how much Sherlock can be affected by emotions and uses Redbeard and Eurus to pull Sherlock down to the maximum extent (if you are here and you don’t know who Redbeard and Eurus are, then you are gonna have a very difficult time). 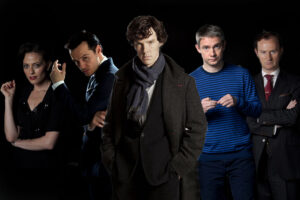 And well, the series has its romantic side too, with Molly and Irene. Molly is a pathologist who works at St Bart’s and helps Sherlock out with his investigations. If you have watched the show, you might have wondered where he gets the eyeballs and brains from, and even though the series never says where he gets it from, we can make our assumption, and coming to Irene Adler. She is the lady who believed that Brainy was the new sexy, and followed it. It didn’t work so well for her benefit, it gave away her most prized possession, but it did give us a glimpse of Sherlock being flustered!

But the romance wasn’t restricted to Sherlock. Watson had his attractions too, but it all seemed to be futile in the presence of Sherlock. Maybe it was good Sherlock died (for the ones who haven’t watched, I’m sorry!) because then we got Mary! Mary was a cheerful wife who always supported her husband. Mary knew how to keep the boys on track and also knew how to solve mysteries. She was a mystery herself! She was the charm that the show required, and everyone can admit, she was the most loved and admired character of the show (and also in the show). 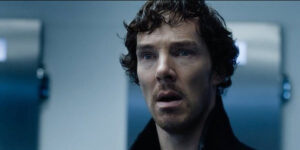 In the show, we also meet another genius, who is not as skilled at solving mysteries as Sherlock, but he is different from the rest, Mycroft Holmes. He is the one who walks around with his chin high, taking care of his brother’s health, and making sure that the family and the state are unharmed. The man does have his list of secrets, few of which turned out to be too dangerous for the show’s characters, but as we all know, he did it for the good of everyone. Or at least he had good intentions in mind. I’ve said enough, so let’s get started with the Ultimate Sherlock Quiz.

3 thoughts on “The Ultimate Sherlock Quiz”