Hello everyone! Welcome to another super interesting quiz. Not all shows have an impact on people even after decades of going off-air. But today we are here with two such shows whose characters, one-liners, and humor are still remembered by millions around the world. As you have guessed from the title, we are talking about Friends and Seinfeld. And today we are going to check how well you remember these shows through a quotes quiz. But before jumping directly to the quiz, let’s take a how different yet similar these two shows were.

On the surface, Friends and Seinfeld are two very different shows. Friends are involved in the lives of six best friends whereas Seinfeld is named after a single character. But still, Seinfeld not really sidelines its other three main leads which are equally hilarious and contribute as much as the lead itself. Another difference between these two shows is their humor. Friends is more into feel-good and simple humor (with loads of sarcasm from Chandler, of course!) but Seinfeld lives on sarcasm, wit, and sass. All the leading characters of Seinfeld are quirky and they simply do not learn anything and want to live the way they are. And that’s why the show is described as a show about nothing.

But despite all these differences there seem to be a lot of similarities between the two shows. The most common is the concept. Both shows revolve around a group of friends in their mid-late twenties who struggle through life. Interestingly, all the characters from both shows live in New York. Above all, the lead characters hang out at the café all the time. Because Seinfeld came out before Friends so might be the inspiration behind it. But it’s really hard to say that since most of the shows have such minor similarities.

Another difference between the two shows is their relatability with the audience. Friends, in most people’s opinion, is way more relatable because of its common characters with their normal jobs and all. On the other hand, in Seinfeld, all characters are funny but less relatable to the common people. Another thing that makes a difference between the two is that Friends’ characters evolve through time, just like a normal human being, but people in Seinfeld are never changing which makes them a little bit artificial. 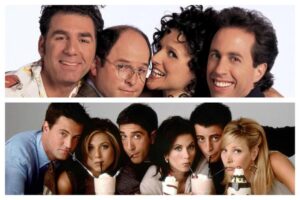 Even though both, Seinfeld and Friends are sitcoms, they have a different vibe and thus they appeal to very different kinds of audiences. To love Seinfeld, you have to be much more involved in the characters and humor whereas Friends makes you feel at home. Maybe that’s the reason why Friends is much more popular than Seinfeld. But if you love good humor with nonsensical situations you need to come back to Seinfeld.

So that was it for today. Do let us know which one of the two shows is your favorite. And now let’s start with today’s quiz, do not forget to tell us your scores in the comment section.

Are these quotes from Friends or Seinfeld?

The Hardest Seinfeld Quiz Ever