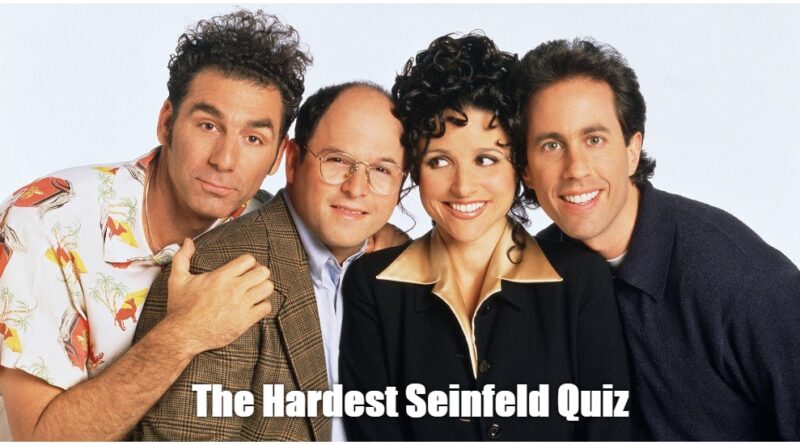 Welcome to another Seinfeld trivia quiz. In this one, we will test your knowledge with the hardest Seinfeld quiz ever. There will be very tough questions. But before we get started, let us look into some details.

As a comedian rising in popularity in the late eighties, Jerry Seinfeld was presented with an opportunity to create a show with NBC. Seinfeld asked fellow comedian and friend Larry David to help create a premise for a sitcom. The show stars Jerry Seinfeld as a fictionalized version of himself and mostly focuses on his personal life with a handful of friends and acquaintances, including George Costanza, Elaine Benes, and Cosmo Kramer.

When the television series, Seinfeld, first aired in 1989, there weren’t many people that had confidence in how well it would do with audiences. It was unlike any other sitcom on television since there really wasn’t a storyline with the characters. Jerry Seinfeld has done a number of interviews regarding how the show came about and he’s always maintained that the series was actually a show about nothing. Little did the Peacock Network know that eponymous star Jerry Seinfeld and his co-creator Larry David’s little “show about nothing” would become their benchmark sitcom for the next decade, redefining primetime comedy in the process.

The adventure begins and ends with a conversation about a button on a dress shirt, but even for “The Show About Nothing,” a lot happened over the course of its nine-year, nine-season, 180-episode run. Seinfeld broke several conventions of mainstream television. Larry David is credited with refusing to follow the predictable sitcom formula that would have a blossoming romantic relationship develop between Jerry and Elaine.

Think you know all there is about close talkers, shrinkage, and the jerk store? Then see if you’re spongeworthy by taking this Seinfeld quiz. There are 50 questions and you need to answer at least 40, in order to pass.

9 thoughts on “The Hardest Seinfeld Quiz Ever”