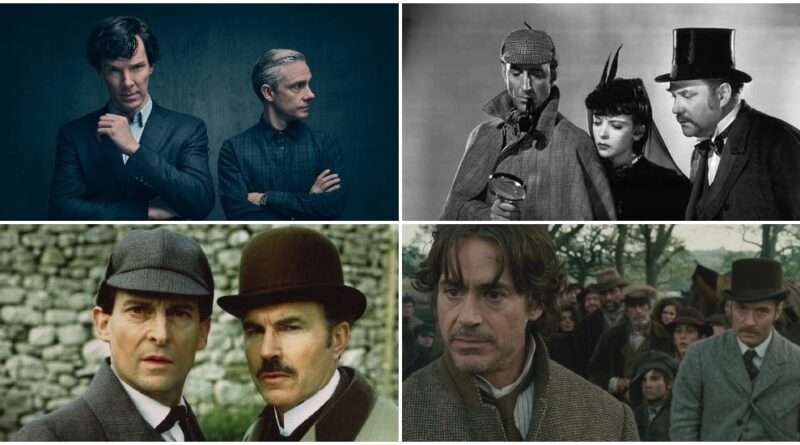 Sherlock Holmes first walked the streets of Victorian London in the imagination of Sir Arthur Canon Doyle more than a century ago. But even after such a long time, he remains universally acknowledged as the most famous detective of all time. He is one of the most adapted fictional characters in television, films, animations, comics, and theatre. Naturally, with every adaptation, we see a different Sherlock.

Interestingly, even after being adapted so many times, our Sherlock remains close to the original character created by Doyle. This is because the stories were written over the span of 40 years and Sherlock’s character aged with Sir Doyle. This is reflected in the change of perspective in which Holmes is written as a character. This also gives more shade to the creators to choose whatever traits they want to focus on. So, all the interpretations or reinterpretations of Sherlock Holmes do rise from the original source material, though a little bit distorted most of the time.

Undoubtedly, Sherlock Holmes remains one of the most influential characters in literature and films. Among such heaps of adaptations, some become an absolute favorite and definitive to the character. And today we are going to rank the top 10 best Sherlock Holmes movies and TV shows.

Based on critics’ opinions and fans’ reviews, here are the ten best Sherlock Holmes movies and TV shows adaptations.

This adaptation of the Sherlock Holmes series gave inspiration to the 2010 BBC version. Isn’t that enough to see the greatness of the adaptation? This movie was earlier meant to be a musical adaptation but later was made into a drama. The movie’s tone is a little satirical but it tries to keep up with the books. It is one of the few movies that try to differentiate Sherlock as portrayed by Watson in his stories and the real Sherlock. The movie is also sprinkled with a few comical moments to complement the dramatic storyline which is carried out really well. 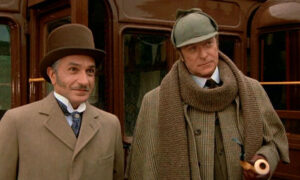 One of the earliest actors to play Sherlock Holmes onscreen was Michael Caine, who played Sherlock Holmes in ‘Without a clue’ in 1988 which is a very distinct take on the beloved character. In this comedic take of the story, he becomes an actor who is hired by Watson to play the super sleuth allowing him to work out the crime in the background without drawing attention. As the story progresses, we see the primary traits of Holmes take over the plot with the brilliant portrayal of Caine. The story may set a different tone but it certainly leaves a lasting impression on the audience and Michael Caine’s portrayal of Sherlock Holmes is among the top ten. In this Canadian depiction of Holmes, we have to movies ‘Silver Blaze’ and ‘Murder by Decree’. Christopher Plummer portrayed Holmes in both movies. Though most of the movies and series portrayed Sherlock as incapable of emotions, this is certainly not the case with Plummer’s depiction of Holmes. Plummer presents the character with the capability of being an ordinary human with emotions and feeling along with extraordinary intelligence. This makes the audience a lot more relatable to the character. 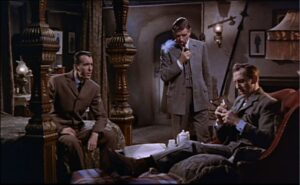 ‘The Hound of the Baskervilles’ is probably the most adapted story of the Sherlock Holmes canon as it is a detective story but it also gives a touch of gothic fiction. This 1959 adaptation of the movie was one of the most amazing portrayals of this horrifying tale which is very close to the book. Also, the portrayal of Sherlock by Crushing is incredibly enjoyable and engrossing to watch. So incredible was Crushing’s Sherlock Holmes that he was also cast in the sixteen-episode BBC series of Sir Arthur Canon Doyle’s Sherlock Holmes. 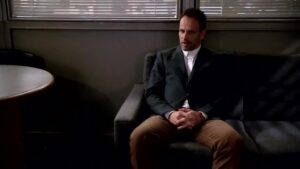 Made in 2012, this adaptation of the great series is famous for its differences from the original source material. The first and foremost difference is that this series is set not in London but in New York and Dr. Watson is a woman called Joan Watson. Though this swap of things affects the story a lot but Sherlock played by Jonny Lee Miller is as enigmatic as any other Sherlock. Unlike other shows and movies, Elementary focuses a lot more on Sherlock’s drug addiction and his recovery. The show consists of seven seasons which makes Jonney Lee the only actor to have played the character for so long. Sherlock Holmes is a character whose survival rests on his mental capability but this adaptation of the series takes a different take on that. Set in the 19th century, this adaptation of Sherlock Holmes feels very modern and the Downey’s Sherlock is not only a highly extraordinary intellectual but also a physical hero. This adaptation explores the rough side of Sherlock and the story itself which is very different from the traditional interpretation which was made over the last century. The movies proved blockbusters not only because of Robert Downey Jr’s stardom but because Sherlock’s character has not been explored in this light before these movies.

4. The Hound of the Baskervilles (1981)-Vasily Livanov 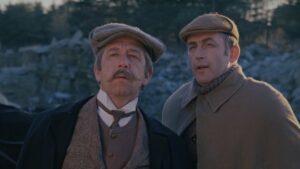 The bar was high for this one as this particular story had been the most adapted story of the canon but this Russian adaptation stands out in its portrayal of the horrific tale. Hard to believe that a Russian could play an English sleuth so wonderfully but it’s true. Vasily Livanov as Sherlock Holmes is not only a treat to the eyes but the soul. It is also considered to be one of the finest portrayals of Holmes by a foreign actor. Vasily went on to play Holmes again in ‘The adventure of Sherlock Holmes and Dr. Watson. The thing that makes Vasily’s Sherlock different is that he is not only intelligent but also wise and funny at times which gives balance to the character.
And now it’s time for the top 3 adaptations of Sherlock Holmes! 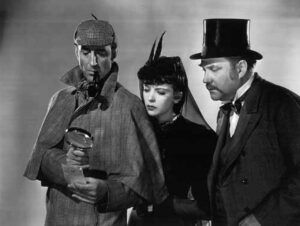 Basil Rathbone is considered to have set a benchmark for the finest portrayal of Sherlock Holmes when he played the character for the first time in 1939. And it was just the start, with the episode, it got better and better. So much so that he still is the first choice for most fans of the series. The character’s appearance and temperament were kept very close to the Sherlock created by Canon Doyle. The same deerstalker hat and cape became the definitive items of the extraordinary character. Rathbone’s portrayal was so perfect that he kind of became the face of Sherlock Holmes for many and inspired many actors who would play the character in the future. 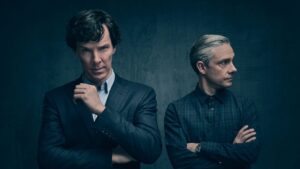 When it comes to modern adaptations of unforgettable tales, many creators mess things up. But this 2010 BBC miniseries portrayed Sherlock Holmes like no other movie or series. Set in the 21st century, Benedict Cumberbatch plays the unforgettable character of Sherlock. This Sherlock seems to oscillate between boredom and high enthusiasm and is a so-called sociopath which is contradicted by the character itself as it is seen to be a very emotional person who is just incapable of expressing them. The show is unique as it does not follow the original stories but takes fragments from them and creates its own stories. As it is set in the modern-day, heavy use of technology in the investigating process makes the stories complex in nature. 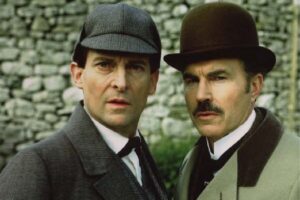 The first spot for the finest performance of Sherlock Holmes goes to Jeremy Brett without a doubt. Fans consider him not an actor playing Sherlock but he becomes Sherlock and he is the only actor who broke the benchmark set by Rathbone. Apart from Jeremy Brett’s fine performance, another reason for the success of this series is that it is very close to the original source material with very less distortions which of course, makes the readers happy and also introduces the audience to the original works of Canon Doyle. And that is why for many Jeremy Brett is the ultimate Sherlock Holmes.

So this was our list of the top ten Sherlock Holmes movies and TV shows adaptations. Don’t forget to share this article with your fellow Sherlockians and do let us know who is your favorite Sherlock Holmes in the comment section.