Hey everyone, welcome to the most interesting Joey Tribbiani quiz. What’s most interesting about today’s quiz is that this quiz is not based on Joey but on the bunch of girls he dated during the show. In fact, Joey dated fifty-six women on the show. So this Joey Tribbiani’s girlfriends quiz will include questions from all these relationships with Joey. But before that let’s take a look at Joey’s most potential relationships on the show.

Joey was introduced as a struggling actor living in New York. From the first scene of the show, we get to know about his playboy image. He loves strip clubs, hooking up, and loves dating all sorts of women (definitely not those who take his food off his plate). Overall, he lives in the moment and enjoys life to the fullest without taking too much pressure. This carefree attitude changes drastically during the later seasons. He becomes comparatively more responsible and starts thinking about his career. However, it is unfortunate that he does not find love like all the other characters. Nevertheless, Joey has a lot of hook-ups as well as serious relationships throughout the ten seasons in which he takes a lot of pride.

Joey is often shown as pretty dumb, and that suits his character very well.  However, he dated some of the most intelligent women: Charlie Wheeler being the prime example of how good Joey is among ladies. Ross’s colleague and very intelligent, Charlie seems a little intimidating to Joey and it was funny watching him try to fit into her world. But how is that possible if Ross is there? Things go totally out of hand when Ross kisses Charlie and takes his revenge, Joey kisses Rachel which starts a different storyline altogether. 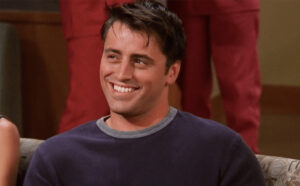 Joey’s most serious and most important has to be with Rachel. A lot of fans didn’t like this pairing but if we look at the intensity of care and genuine love both had for each other, it has to be Joey’s most serious relationship. Besides the fact that he was not a man who is up for marriage, he agreed to marry Rachel (even though it was just a misunderstanding). It is clear that Joey loves Rachel and always found himself attracted to her, but he did not make a move because of Ross. We, as the audience did not expect this from a character like Joey, but we are certainly wrong. This sacrifice makes Joey’s relationship with Rachel the best.

The fact that Joey had so many romantic interests in the show kind of made him look like a playboy who doesn’t want to settle in life and have a family. This was not true at all because Joey once expressed to Monica and Chandler that he wants to have a relationship like theirs. Sadly, he did not find his love on the show.

So that was it about Joey Tribbiani and his tumultuous love life. And now it’s time for you to take up this Joey Tribbiani’s girlfriends quiz. And do let us know who according to you was the best partner for Joey in the comment section.