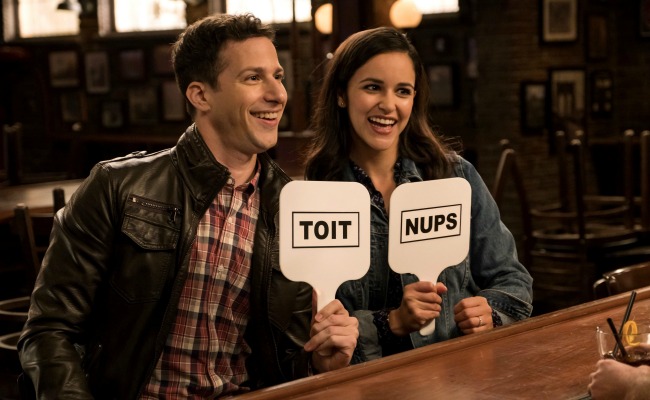 Hey everyone! Welcome to yet another Brooklyn Nine-Nine quiz and today we are here with our smartest and the most competitive couple of the Nine-nine—Jake Peralta and Amy Santiago. From colleagues to enemies to friends to life partners, these two have had their fair share of ups and downs. Who would have guessed that they would end up together after so much awkwardness starting from Jake’s confession of his attraction to Amy dating Teddy? But ours and of course, Boyle’s dream came true and the rest we all know. So let’s take a deep dive into Amy and Jake’s relationship and then we will treat you with a fun quiz as well.

The most important thing in Jake and Amy’s relationship is a risk. Yep! The risk they both took to be together. Sounds funny! But it’s true. Remember the time Amy and Jake went for the stakeout in season one and Holt called to replace Amy and Jake said he “wants to see where this is going”. Yes, this was intended for the stakeout but undeniable the way he said it, it was the first moment Jake realized his feeling for Amy. Though it took them much time after that to get together but that was the hint.

We all have heard the phrase ‘opposites attract and in Peraltiago’s case this cannot be any truer. Amy would have never thought of marrying such a goofball as Jake and Jake never really liked the nerdy side of Amy. But it’s funny how these two poles apart characters fell for each other and especially for the things they didn’t like in each other. And that’s why Amy and Jake are complementary to each other. This not only balances their relationship to a great extent.

One of the most important things that come out as a consequence of their being totally opposite of each other, is that they are comfortable in their own skin. And they hardly want to change each other. Of course, Amy did change a lot of Jake’s annoying habits but there is a difference between changing a person and changing a habit. Right? Instead, they maintain a healthy relationship where they accept each other for who they are (and that includes a lot of disagreements too). Jake might have confessed his love to Amy twice before they actually started going out. This steadiness gave a strong foundation to their relationship. The co-creator of Brooklyn Nine-nine, Michael Schur, and his previous shows like ‘The Office’ also showed the slow-building relationship of Pam and Jim, and the same happens with Jake and Amy as well. This formula seems to be a signature of the show’s creator and it’s successful too, so we got nothing to complain about.

So that was a brief analysis of Jake and Amy’s relationship and now it’s time for you to take up the hardest Jake Peralta-Amy Santiago quiz and do let us know your scores in the comment section. All the best Nine-Niners!