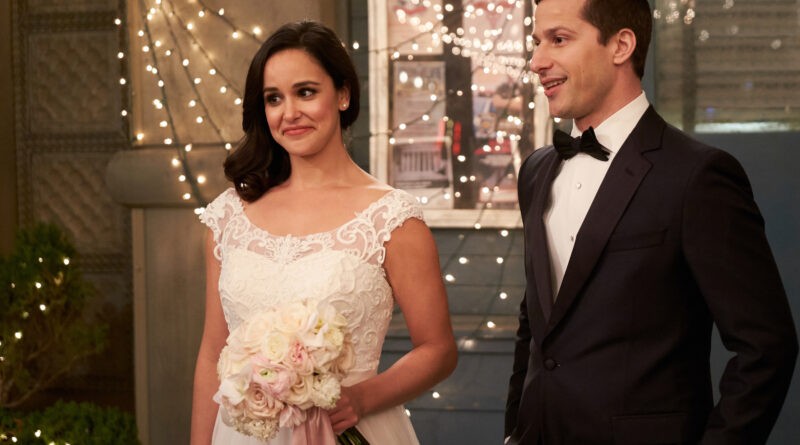 The ones who started as work frenemies soon turned into friends that later turned into a relationship that gave millions of viewers legit relationship goals. Brooklyn Nine-Nine, a comedy series revolving around the lives of the cops of the ninety-ninth precinct has secured a special place in its fans’ hearts with its consistent brilliant delivery and one of the biggest contributors to the success of the show was Jake and Amy’s relationship.

Starting from their first stakeout together in season 1, episode 13 where Jake realizes his feelings for Amy to their memorable wedding in the season 5 finale when it comes to Jake and Amy, each season, each episode gave us major relationship goals. Being an ardent fan of the whole Brooklyn Nine-Nine series and obviously Jake and Amy’s, today I share 8 times when Jake and Amy’s relationship made me believe in love again. 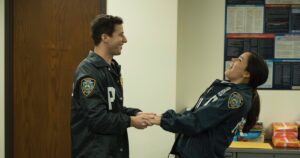 Both Jake and Amy are highly competitive, and I guess that’s what keeps the fun and spark of their relationship alive. In season 4, when Jake and Amy finally decide to move in together, there was one big question: Who is keeping his or her apartment, and who is moving in? Neither of them was ready to back out so they decided to solve it the way they solve most of their problems- A bet.

According to the bet, whoever caught the maximum number of perps in their ongoing case wins and gets to keep his or her apartment. The competition was tough and neither was willing to back out until the last moment when Jake realized that what matters the most to him is to be with Amy. If they are together, the place is the last thing on his mind. So he backs out and lets her win. Also, his apartment was literally no better than a hole so it did help him make a decision but his readiness to let Amy win for her happiness touched all the fans.

2. When Amy Went Into Prison Undercover 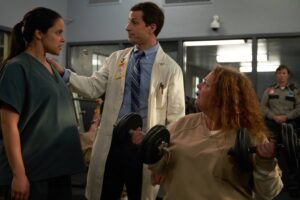 I think the biggest proof of Jake’s love was reflected in season 3 when Amy had to go on an undercover mission to the Texas women’s prison to extract some crucial information regarding a criminal at large from his sister who also was serving her term in the same prison. Jake was worried out of his mind, and as he said, he could not see the woman he loves surrounded by all those criminals, unarmed and unprotected. That one line showed how much he cared for Amy because for a detective, whose heart and soul was dedicated to solving cases, this was the first time that the worry of a case took a backseat for the women he loves.

3. When Amy Got Promoted 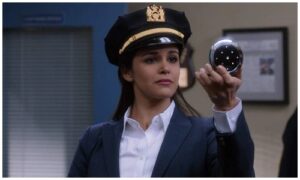 This scene made all women across the world step up the standards they set for men. When Amy was up for a promotion and had to take the sergeant’s exam but right before the test, she got cold feet fearing the effect her promotion might have on their relationship. But it was Jake who encouraged her to take the exam and literally pushed her to the exam center when ran away two hours before the test.

In a world where toxic masculinity makes men unable to appreciate their partner doing better than them, Jake’s relentless support for Amy and her dreams and pushing her to achieve them is the sweetest thing I saw in any sitcom relationship ever.

4. When Jake Was Ready To Get Demoted For Amy 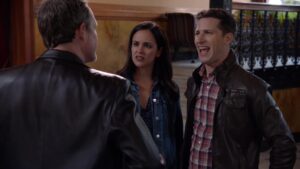 Remember that time when the vulture joined the Nine-Nine as their captain? That was an episode that irked all B99 fans but the limits were crossed when he ordered Jake to stop seeing Amy. However, Jake’s love for Amy knew no bounds, and he was ready to give up his dream job as a detective, get demoted, and start all over again but he was not ready to give up on Amy. Ladies, if Jake can give up on his dream job for Amy, you should certainly raise your standards. There is a Jake for everyone out there.

5. When Amy Supported Jake Throughout His Term In Jail 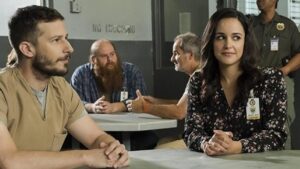 Well, Amy wasn’t the only one who had to go behind the bars. While Amy went undercover, Jake was framed in a drug case and was actually sentenced to prison but that did not stop Amy from loving him. Before he went to prison, she comforted him and told him that she will keep fighting for him no matter what and will do whatever it takes, and she did it. When Jake was in prison, she kept working on his case, determined to prove him innocent. And I think that’s the purest form of love I have ever seen.

6. When Jake And Amy Got Married 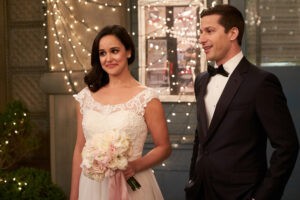 Jake and Amy’s marriage was that one scene that made us all realize that when you are really in love, nothing else matters. While Jake and Amy had planned every part of their wedding with utmost precision, everything went upside down when a criminal who was arrested by Amy years ago planted a bomb in the venue.

Needless to say, their wedding was canceled. Starting from the perfect decoration to the perfect cake, they had nothing they planned but when Jake said that he would marry her anywhere, even on the top of the Empire’s building when King Kong attacks, Amy realized that life is unpredictable but with the right person, she can make it through anything, and the right person for her was Jake. This even made it to her wedding vows and I can bet on this that till this date, Jake and Amy’s wedding is the most romantic wedding that I have ever seen.

7. When Jake Supported Amy On The Workplace Sexual Harassment Case 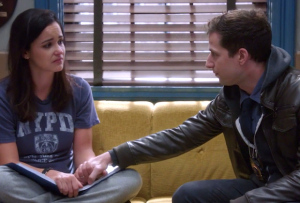 Remember in season 6 when a sexual harassment case was registered at the Nine-Nine and they were unable to find any evidence to catch the culprit? Well, owing to certain past traumas, Amy wasn’t ready to give up or ask the victim to compromise. When she explained to Jake why this case was so important to her, he not only did comfort her but supported her till the end until the culprit was behind the bars. He set the benchmark way too high with his constant support for Amy and pushing her to achieve everything she wants.

8. When Jake And Amy Were Planning A Family 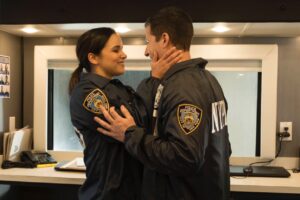 If their pregnancy journey is taken into account, they gave us several relationship goals through those few episodes starting from mutually deciding upon starting a family to the memorable night of little Mac’s birth, the sheer understanding and love between them is inspiring but one specific event caught my eye and that’s when they were trying to get pregnant. No matter how hard they tried, they could not conceive. Amy was disappointed and ready to give up but Jake made her believe in them again, he stood by her and showed that they are already a family, with or without a baby.

So that was my favorite 8 moments where I got major relationship goals from Jake and Amy’s relationship and if you are an ardent fan of Brooklyn Nine-Nine, just like me, do let me know about your favorite moments of their relationship that touched your heart.

Check your knowledge about the couple: The Ultimate Jake and Amy Quiz