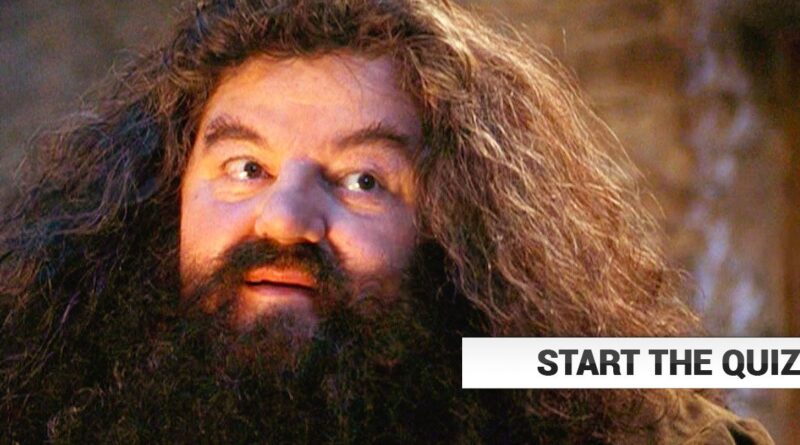 “Yer a wizard, Harry” – a line that didn’t just change the life of a fictional 11-year old mistreated little boy living inside The Cupboard Under The Stairs, 4 Privet Drive, Little Whinging, Surrey, but millions of little kids all around the world in real life. And these memorable words were uttered by none other than Rubeus Hagrid, the gamekeeper of Hogwarts School of Witchcraft and Wizardry and the most beloved gentle giant we have ever known. Before beginning this Rubeus Hagrid quiz, let us look into some details.

Considering the magnanimous popularity of Harry Potter worldwide, generating sales of more than 500 million copies in books and movie adaptations that grossed millions more at the box office, it is no surprise how Rubeus Hagrid came to be a favorite amongst Potterheads. As we see through the course of seven books and eight movies, Hagrid has a very special place in his heart for Harry and tries to take care of him in every way he can. Hagrid was instrumental in the rescue of Harry Potter from the blasted and shattered house in Godric’s Hollow, where Voldemort killed Harry’s parents, and perhaps, the first person to treat Harry with kindness and love.

From rescuing Harry as a “little tyke” from Godric’s Hollow to taking him his Hogwarts acceptance letter, then seeing him through buying his magical paraphernalia in Diagon Alley with his inheritance from the Gringott’s Bank and finally, taking him to King’s Cross Station to board the Hogwarts Express his first time, Hagrid is pretty much Harry’s guardian angel. Harry gets to visit Hagrid after hours and Hagrid is always seen sneaking him treats and defending him when he gets into trouble.

The emotion isn’t one-sided; Harry absolves Hagrid of the false allegations for housing the monster of the Chamber of Secrets in his second year, a crime for which Hagrid was expelled from Hogwarts during his time and, sent to Azkaban during Harry’s years. Harry is always seen comforting Hagrid whenever one of his “wild” animals acts up and is then decreed to be punished or banished or there’s the time he agreed to take care of Hagrid’s half-brother giant when Umbridge was at school and Hagrid was about to be sent away. And it would be a shame not to mention how Hagrid, during the Second Wizarding War, being captured and bound himself, still protested against Harry giving himself up to Voldemort, at the expense of his own life. 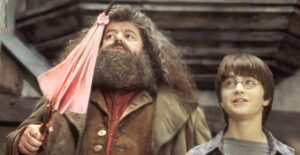 A little bit of what we know about the early life of our favorite gentle giant, Rubeus Hagrid was born to a wizard and a giantess. His mother left him and his father, when Hagrid was about three, never to return. From his conversations with Harry and his friends, it can be easily figured that Hagrid cared a lot for his father, but remembered very little of his mum and did not much like her. Despite being expelled from Hogwarts in lieu of transgressions he did not commit, Hagrid is seen to have a considerable amount of magical prowess, perhaps, even comparable to the NEWT-level academic difficulty.

With his wand being confiscated on the grounds of expulsion, Hagrid seems to be skilled even at non-verbal magic, a feat that only the most powerful wizards and witches are considered able enough to perform; along with this, Hagrid is skilled at transfiguration, charms and even, potions. More than skill, he exhibits an immense amount of knowledge in all magical subjects, perhaps, the best of it in the subject of the Care for Magical Creatures; Hagrid is highly accomplished in interacting with, gaining trust and caring for all kinds of magical creatures, even the more dangerous ones, like Aragog, the acromantula.

Along with his wizarding capabilities, Hagrid inherited some magical qualities from his giantess mother, including superhuman strength, magical and poison resistance and preternatural endurance. Hagrid’s other talents include admirable physical combat skills, gamekeeping skills, tactical thinking and resourcefulness, craftsmanship skills, social networking skills, cooking, teaching and playing the flute – all of which make him a prized asset for Dumbledore and Hogwarts. But what Hagrid is really valued for by his loved ones, was his heart full of courage and love.

So, now that the quick recap is done with, who here wants to know Rubeus Hagrid better? Or if you already do, I am sure this quiz will be right up your alley! Potterheads, if you are a Rubeus Hagrid fan, then I welcome you to participate in THE ULTIMATE RUBEUS HAGRID QUIZ, and put your knowledge to the test (hopefully, it won’t be as difficult as the OWLs)! Grab your butter beers and raise your wands as you rise to the challenge of crushing these trivia questions. Let the quizzing commence!