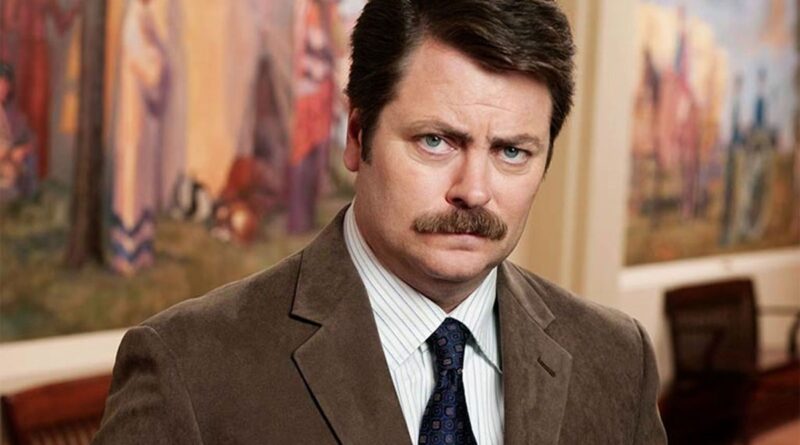 Hello guys, it’s time for another ‘Parks And Recreation’ quiz. In this article, we present you Ron Swanson quiz, based on the character from the NBC comedy-drama Parks and Recreation. Before we get started with the quiz, let us look into some details about Ron.

He used to work as the Director of the Pawnee Parks and Recreation Department, who believed in the disposal of government waste, and during his term at the office, he closed several recreational spaces. He also used to go hunting and fishing and also can be seen being the jazz saxophonist Duke Silver.

Ron’s relationships were pretty messed up, which is evident from the fact that he had 3 wives. The first one was Tammy 1, who was a candy striper at the hospital. Tammy 2 was his next wife with whom he had two divorces, after the first divorce they dated again, but it ended shortly. Ron though still had feelings for her and she was ready to take advantage of it. His current wife is Diane Lewis, who was a middle school vice-principal and was not the type of Tammy, that Ron had dated in the past. Along with one unseen brother, who worked in the air force and probably was the one who shot him in the feet, he had 3 more brothers, Don, Lon, and Vaughn with whom he worked at Very Good Construction.

During his childhood days, he used to love building things and woodwork and also had won an award for the chairs he had made. Lying was one such thing that he hated, besides that was skim milk which he hated even more and considered as water lying about being milk. Unhealthy foods were just his thing, and due to his unconditional love for cholesterol foods and unhealthy foods, he openly despised people who were vegans. He also considered fish as the vegetable of meats.

In one instance, he went into a state of shock when he could not consume meat while he was in Chris’s house, which was void of red meat. Due to his high consumption of red meat and oils, he had a very high capacity for alcohol and never had a hangover, not even after drinking an entire jug of Swanson liquor in 1 swing. He even consumed 1 shelf of alcohol in a week and usually drank it neat. Ron is known to be a very private person, who did not trust technology and thus shared no information regarding himself, he even erased his records on Government documents and his photos. He even trashed his computer after he came to know about online cookies and so he switched on to a burner phone so that no one could track him. 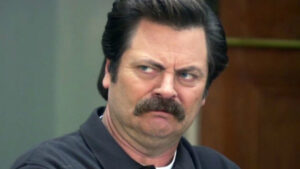 Speaking of patriotism, he mocked every country other than America, he even mocked Big Ben, sarcastically stating that the US did not have any clocks of their own. He even refused to use British currency, while stating that American dollars were the most beautiful papers in the world.  Though a steely person back at the office, he openly admitted that he loved solving riddles and puzzles, which can be seen when he shows his giddy excitement while helping Den and Andy solve Leslie’s Valentine’s Day Puzzle. He even congratulated April at one point on coming up with a riddle that even was not able to solve.

Due to his minimal trust in banks, he invested the money in the form of gold, which he had stashed in several locations in search of which Tammy 1 failed and found Ron’s decoy gold. Though it is not revealed how much he had in the form of gold, once while writing a will, 5% of Ron’s gold shocked Ben and the lawyer indicating that it was a huge amount. He always wanted his daughters to be hard workers without relying on the gold that he had, so while writing his will he stated that he did not want to give them all his gold. His former will was pretty short which consisted of some symbols which were not readable by anyone. Ron stated that the one who kills him will know how to read it and all his wealth will go to that person.

Ron’s endurance level was quite unbelievable. He once got shot at the back of his head with a shotgun by Tom, he still managed to be conscious and also recovered the same day and stood up to complain to Tom and Leslie. His extreme capability of handling pain had restrained him from crying has only cried twice, once when he was hit by a bus and once at Leslie Sebastian’s Memorial. He always used to think it was a good idea to show his strength and manliness and once pretended to pull out his teeth with pliers in front of the office, even though the dentist had pulled it out the previous day.

Now, how about a quiz on your Duke Silver aka Ron Swanson, from Park and Recreation? Test your knowledge from the Ron Swanson quiz down below on the show and Ron. Check it out and know your score.