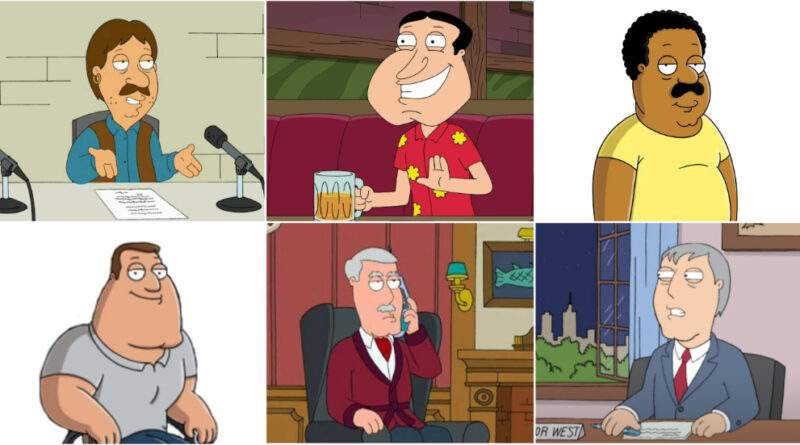 One of the most important supporting characters of the show is Mayor Adam West, the former mayor of Quahog. Adam might be the worst mayor in the world, but he certainly knows how to make us laugh. With his ignorance and little quirks, Mayor Adam West has achieved a cult following among the fans of the show. Another very interesting and complex supporting character of the show is Joe, the superhuman cop of Quahog. Hands down he might be funnier than Adam due to his aggressive and quirky nature. The fact that he yelled at his unborn child is an example enough to showcase how funny the character is.

Next on the list is Peter’s father-in-law Carter Pewterschmidt. This old, grumpy man is always at daggers with Peter. But even though this makes us sympathetic toward Peter, it also makes the situation insanely hilarious. And include Lois with this duo, you get the perfect ensemble for the best comedy.

Another character that deserves a shout-out has to be Glenn Quagmire. He has been a recurring character on the show for many episodes and he is sure to make us laugh with his contrasting personality. It is very difficult to figure out if he is the smartest or the dumbest in the room. But he is sure to be the most hilarious supporting character that we cannot forget. Family Guy is also known for its spin-offs and the next supporting character we will talk about getting his own show because of his popularity among fans. Any guess? Yes, we are talking about Peter’s friend Cleveland. Among most of Peter’s friends, Cleveland is the most sensible and caring. He always has the best advice for everyone and it was this attitude made him a fan favorite that led to a four-season spin-off of ‘The Cleveland Show. And the last supporting character on our list is Bruce and his innumerable characters impersonations. It seems like the whole of Quahog’s work dwells on Bruce’s shoulders because throughout the show we see him working a bunch of different jobs which makes his circumstances even more hilarious.