How I Met Your Mother is a comedy about Ted and how he fell in love. The story starts when Ted’s best friend, Marshall, came up with the news that he will propose to his long-time lover, Lily, a kindergarten teacher. Then Ted feels that he better get a move on if he too hopes to find true love, and from here, the story begins.

While the show’s story revolved around Ted telling his kids about how he met their mother, the show not only focuses on his love life. The show also revolves around the life of his friend circle. His friends were like a family to him and supported him in his life. They also stopped him from doing stupid things. There is a quote Barney says in an episode in the final season that “Whatever you do in this life, it’s not legendary unless your friends are there to see it.”

Apart from the major characters, there is an array of versatile characters who support making the scene amusing and enjoyable. These characters may not have that much screen time but they did leave an everlasting impression. Ranjit is one of such characters, the cab driver offers impeccable comic timing and is loved by the fans. Another character is Marshell’s ex, Chole,  due to her crazy eyes and maniacal laugh, Chloe stands out from other characters and establishes her own uniqueness. Carl, Garrison Cootes, Victoria, etc are some of the most loved supporting characters. 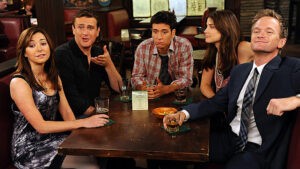 How I Met Your Mother Supporting Characters Quiz