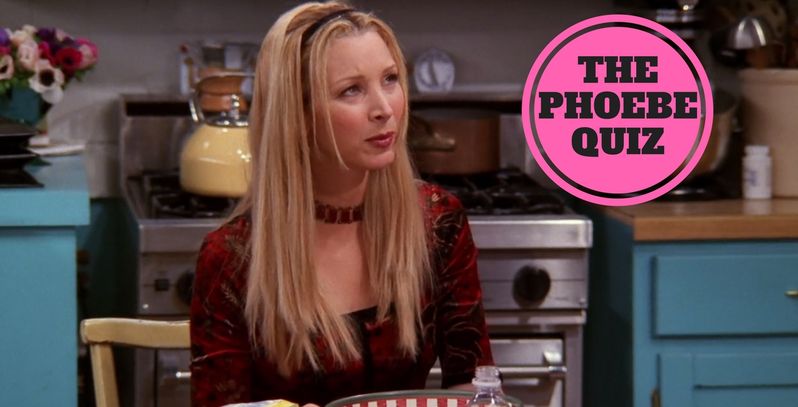 Welcome To The Hardest Phoebe Buffay Quiz Ever

Friends is one of the most popular television shows in history. From 1995 to 2004, America tuned into the hit sitcom to catch up on the lives of their favorite set of six friends – Monica, Rachel, Joey, Chandler, Ross, and Phoebe. Friends is one of those shows that nearly everyone has watched at some point in their lives, but there are some true die-hard fans out there that can’t get enough of it – even years since the show has ended.

Perhaps the most unique friend of them all is Phoebe Buffay. She is eccentric, a little ditsy and childlike but ultimately a kind and caring person. She is also tough and street smart, since she was out on the streets at age 14. The self-taught musician performs her zany songs at Central Perk, the coffee shop the friends all hang out in.

Whether Phoebe Buffay is your favorite Friends character or not, there’s no denying that she’s the most shamelessly silly of the six leads, brought to life with an endearing daftness by Lisa Kudrow.

Phoebe routinely serves as a ridiculous palate cleanser between the series’ more serious-minded Ross/Rachel drama, and despite the heightened nature of her character, Kudrow’s performance is an undeniable banger.

Lisa Kudrow’s portrayal of the character earned her a Golden Globe nomination and won her a Primetime Emmy Award, a Screen Actors Guild Award, a Satellite Award, and an American Comedy Award.

Phoebe sure has gotten herself into some outlandish scenarios over the show’s ten-season run and said some truly mind-boggling things, but did you just laugh them off and move on, or do you still remember them to this day? There are 20 questions in this Phoebe Buffay quiz, and you need to answer at least 18 to ace this quiz. Best of Luck!

Who Said It : The Office Quotes Quiz