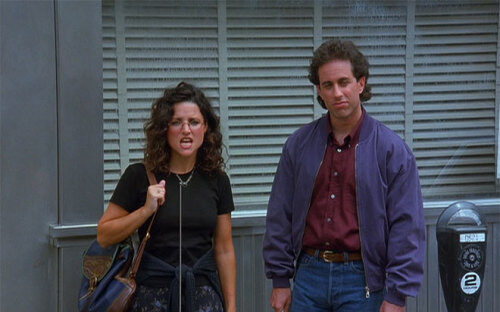 As the title suggests, we are here to quiz you on the relationship between Jerry Seinfeld and Elaine Benes. Now, if you know us, you know that our questions will be tricky, difficult and they will decide whether you are a true Seinfeld fan or not.

Jerry and Elaine dated for a very long time in the series and with their ups and downs like every relationship had, they had their fair share of details that we are going to quiz you about. In the show, they both were shown as best friends as they used to joke around each other about their failed relationship. On the other hand, they dated for a short while in the show as well.

In one of the episodes of Seinfeld, Jerry and Elaine made a set of rules for themselves. One of the rules was that the pair could sleep with each other, but they would still be friends and nothing else. Their rule did slip away as Elaine got upset when Jerry did not want to stay over one night. At the end of this same episode, Jerry and Elaine decided to get back together and become a couple again. Remember the hilarious episode when Jerry got upset because he found out that Elaine used to fake her pleasures back when they both were together, and the argument got so stretched out that Elaine said yes to sleeping again with Jerry, in order to save their friendship. Hah! And well, Jerry did manage to give her pleasure that night.

Throughout Seinfeld, the audience kept getting the hint that the duo will always have feelings for one another, and that they will never really fade away. Remember The Stake Out? Jerry was flirting with a woman named Vanessa and Elaine simply got jealous. And the time when in an episode, Jerry received an erotic message and found out that it was a joke that was Elaine’s idea. Elaine also took Jerry to the hospital once as she wanted to fool her ex, and well she then started to flirt with her ex and for some reason, Jerry was affected by that. Well, we know what the reason was Jerry.

In one of the episodes, Elaine realised that Jerry was super rich and she then started flirting with him. In one of the episodes, Jerry also proposed to Elaine as he had a lot of emotions bottled up. But then he also took it back and surprisingly, Elaine was ready to get married but alas, they did not get back together. In the finale of the show, Elaine almost confessed her love for Jerry while the plane was crashing, but she stopped. 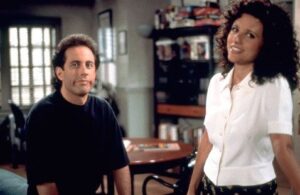 We have given you a refresher, and we believe that a refresher is all a true fan needs to get a hint of all the juicy details. Do you think you are ready? If so, don’t hesitate and simply start taking the Ultimate Jerry Seinfeld And Elaine Benes Quiz that we have prepared for you. Without further ado, let’s get rolling!